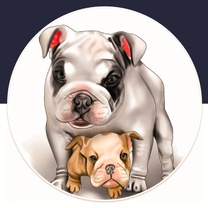 What are Miniature English Bulldogs?

What then is a Miniature Bulldog?

The term Miniature Bulldog can be accurately used to describe several breeds. It is acceptable to describe Miniature English Bulldogs this way but the term Miniature Bulldog also includes mix breed bulldogs. "not registered and not purebred". This is often the part that is confused. Some people will breed an English Bulldog with just about any other kind of smaller dog to make a smaller dog with some of the features of a purebred Bulldog. Examples of this are the English Bulldog/ Pug mix, English Bulldog/ Chihuahua mix and the English Bulldog/French bulldog mix. This will sometimes produce English Bulldog size Pugs and Chihuahuas or the other way around. The consistency is not very often there. As we love all dogs we are not criticizing this. It is important to understand this though, so you know what you are buying, as new puppies often look similar. A mixed breed might sell for $500 as opposed to a properly bred Miniature English Bulldog selling for $3800 and up. You don't want to spend $3800 or more on a mixed breed Mini Bulldog. One of the other factors is that likely the mix breed parents have not been selected carefully and health tested properly.

In 19th century in England, an attempt was made at developing a "purebred" Mini English Bulldog. "purebred" meaning that the breed standard for todays modern day Bulldog was not established until near the end of the 19th century. This was abandoned though early on, likely associated with the development of the French Bulldog as they became wildly popular amongst the social elite of the time.

Our modern day Mini English Bulldog began to be developed around the beginning of the 1980's in the United States. It was done in the same fashion as the Miniature Poodle. It also was bred down from the Standard Poodle without introducing outside breeds. Interestingly it's developer's also faced much opposition from the Standard Poodle breeding community. I guess nobody likes change both then and now! Lol! Now though the Miniature Poodle has been warmly embraced by the entire dog breeding community.

Mini's still face some opposition from the Bulldog community in general but we are getting there. It is still common to hear untruths about how true Miniature English Bulldogs came about. Some say they where all bred down by choosing the weakest and smallest of the litters and some stick by the story that they are all mixes. DNA tests are a wonderful thing for us and hard to refute. One myth is that they are dwarves. Also false. Another one is that they all have defective hearts because they are small and they don't live long due to their size. It has shown to be quite the opposite. In dogs, not always but more often than not, it is the large breeds that live shorter lives. Mini English Bulldogs can live 12 plus years.

As Mini English Bulldogs are not officially recognized as a distinct breed from the Regular English Bulldog there is of yet no official sanctioned breed standard for mini's. They are however the exact same as their bigger brothers and sisters. We feel that our mini's should conform in general to the standard size English Bulldog with the exception of size.

Although it is rare to see a standard English Bulldog below 65 to 70 pounds the official standard is 50 pounds for a male and 40 pounds for a female according to AKC. Most Standard English Bulldog breeders are breeding their dogs supersize by about 20 pounds. Our females range from 32 to 39 pounds and our males weigh from 38 to 45 pounds. All at a healthy BMI. They have much shorter and smaller frames. On average our mini's are about 25 pounds smaller than most Standard Bulldogs you would typically see. Bulldogs can put on weight easily. It is very important to keep them trim. It's all about food consumption. They will eat all you give them and beg for more no matter how much you give them. We will blog about diet at a latter time.